The Whitehall Yearling Lady Rams are off to a great start for the 2019-2020 season. Three games in and the 3-0 Lady Rams have notched victories against Licking Valley, Lakewood and Wellington. With plenty of curiosity around the new look team, one thing is for sure, something big is happening in Whitehall. 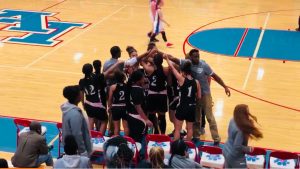 Last season the Lady Rams loss to Licking Valley by a score of 29-56. The Lady Rams had no plans of letting that happen again. In a tough environment at Licking Valley, the team came together and pulled out a 46-42 victory after being down most of the game. A low scoring, defensive battle, definitely left a sweet taste of victory for the new coaching staff who got to see the character and tenacity their team is made of. Leading the way, three Lady Rams hit double figures, Senior Kiara Bagley 12 points, Junior Kari Gullick 10 points and Sophomore Alexia Mobley 16 points and 23 rebounds.

Next up, our season home opener was against a gritty Lakewood team who also was victorious last year over the Lady Rams 42-58. This was definitely a game of swings as each team had and loss large leads through-out the game. A late surge by Lakewood in the fourth almost landed a final blow to the Lady Rams as their press caused lots of problems and led to quick baskets but the adjustments made helped the Lady Rams pull out a narrow 67-62 victory. Leading the way for the Lady Rams were four players in double figures: Senior Kiara Bagley 13 points/8 rebounds, Junior Jewel Watkins 15 points, Sophomore Brooke Greer 12 points and Sophomore Alexia Mobley 21 points/23 rebounds.

The latest victory came against a Wellington team that was simply out matched.  The Lady Rams took the opportunity to get lots of minutes for the entire team. Every player made it into the scoring column and the Lady Rams held Wellington to only two baskets for the entire game for a final score of 83-8. Senior Anyah Jones had a huge 12 point 4th quarter including two 3 pointers that really got the whole team fired up. Sophomore Alexia Mobley led the way with 28 points and 14 rebounds.

“Our first 3 games have been perfect for the start of our season. We had two tough games vs Lakewood and Licking Heights which tested our unity and our fight. The girls were resilient. Even after one of our starters couldn’t play (due to the unexpected passing of her father) our ladies rallied behind that moment and dedicated last Monday’s game to the Watkins family. I always teach our girls to invite being uncomfortable at times because when we accept a little friction then positive change will come. This past week as a team, we dealt with a lot that tested our unity and these young ladies remained strong and lifted up one another. That’s the motto of our team, which is to #StayFocused. It’s still early but we’re looking forward to what the rest of the season brings.”

Next up in the Mid-State League for the Lady Rams: