Michael Jackson’s Thriller album was released, a gallon of gas cost 91 cents, the debut of the movie E.T. and the last time the  Whitehall Lady Rams won a league championship was all in the year 1982.

Back in June 2019, new hire Head Coach Quentin Taylor told everyone that they would win the League Championship this season. He didn’t have many takers on his very confident proclamation after taking over a team who had won  20 games over the past three seasons in total and had finished third out of five in the conference the previous season. Coach Taylor spent the month of June building relationships with his new team and getting the girls to buy in to a whole new way of thinking, training and playing his style of basketball. Curiosity began to quickly build as on-lookers would find the Lady Rams running the bleachers, sprinting on the track and grinding it out in the weight room come fall.  The surprising addition of transfer Sophomore Alexia Mobley certainly added to the anticipation of what was happening at Whitehall, but it was the leadership and commitment from the team and Coach Taylor that had already begun that made her arrival just icing on the cake. 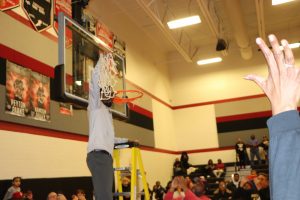 True to his word, six months later, The Lady Rams are the Mid-State League-Ohio Champs. The team has broken the record of single season wins with 17, which arguably would have been a 20+ win season had it not been for numerous significant injuries. With a fantastic win against a tough Buckeye Valley team and on the most special evening of the year as we celebrated senior night, The Lady Rams were able to cut down the nets for the first time in 38 years. Just couldn’t be a better way to end regular season play and send off our seniors Kiara Bagley, Kari Gullick, Izzy Simmons, Sahlena Harvey, Nyah Jones, Desira Henderson and Liana Betts.

Coach Taylor on the season: “In this 1st season coaching girls Varsity Basketball, I came into it very optimistic. My one goal was to win the MSL title as I said in every interview I had. I knew how important it was for our team, our school, and the Whitehall community. This was reciprocated by seeing the amount of fan support we had all year at home and even at times on the road. People felt that something big was about to happen on Yearling Ave. In the beginning we had many rough patches with figuring out roles as some were reluctant with my style and the roles I re-established for them. We went through several close family deaths, two concussions, a broken wrist and illnesses all season. We still prevailed. Missing three starters in the stretch of a tough six game period and one starter for 10 games had really help shape our toughness and identity. This adversity helped mold us into a team that if you scout us you may have missed something because at any moment another girl is ready to step up and that’s been us all year, next person up. We’re very happy with what we accomplished by setting a school record, and winning the MSL, but we have now set our sights on our next goal, winning District. That would make this community proud and electric and would open up the eyes of all the naysayers who believe Whitehall is the easy win each year. Yes, we are going to change that narrative. In all, we’re going to get back in the lab to advance as far as we can in this State tourney run, starting with a District Championship! #StayFocusedIsTheMotto